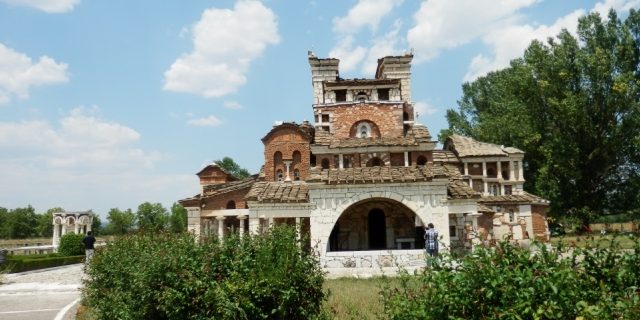 The temple of St. Fotini is located directly across the archaeological site of Mantinea and only 12 km. from Tripoli. Arcadia is the place where “life” was born, where most of the 12 Gods were born and where the myth of the phrase “et in Arcadia ego” was created.

Agia Fotini is the Samaritan woman who met Christ at the well and gave him water. After that she, her two sons and five sisters baptized and they all became evangelists of Christ.

The church is the property of Mantineiakoy League and the reconstruction began in 1971 by architect and hagiographer, Konstantino Papatheodorou.This was a project of life for him so he abandoned his work in Athens and lived for six months in a tent next to the church. He took marble from the area and materials from demolished constructions and quarries, chisel them and gave them the shape he wished.

Its unusual architecture attracts many visitors considering the combination of Byzantine elements with ancient architectural rhythms. His ambition was to show that through the ancient tradition and the Christian history the Greeks may still found their true identity.

Inside the church someone can admire the mosaics of Perseus, Ariadne, Medusa and Papadiamantis who try to get in contact with the saints of Christianity. In the courtyard there is the heroon in honor of those who died for their country and the well of Jacob, symbolizing the meeting between Jesus and the Samaritan women.

Giannis Tsarouchis, the famous painter said: «When I saw this church I felt the relief that comes from the smothered protest”. The Spain architect Alfonso Toribio, when he visited the church had the impression that it was a living building.

The architecture of the temple continues to provoke critic and disagreements whether it’s a temple or an archaeological monument.

The answer to that question would be easy if it concerned any other church. That’s why its inclusion as a religious or an archaeological monument or simply as a work of Art will come from each visitor and his own need for internal search.