MONASTERIES IN THE AREA OF ARCADIA 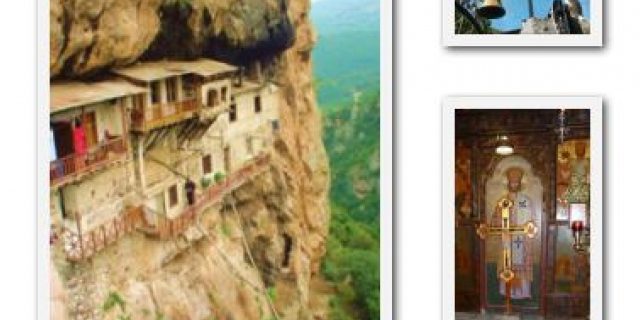 The Poet C.P. Cavafy writing this poem doesn’t want to make a confession of faith but he’s referred to his love for church as a result of his remembrance of the period of Byzantium.

“I love the church- her angel heads with wings,

the lights, the pulpit, the grave images.

There – in one of the churches of the Greeks-

the atmosphere of fragrant incenses,

the measured voice liturgical that speaks,

and the liturgical voice symphonies;

the gravely rhythmic movement of their hands,

the splendour of their vestments; all the things

inherent to the venerable place;

carry me thought to that imperialism-

to those great honours that befell our race

Nowadays, the same atmosphere continues in the orthodox monasteries.

Many monasteries are located in the area of Arcadia and more than 25 are in honor of the Mother of the God. Their foundation is dated from the period of 16th to 18th century. Most of the monks and the ascites in the monasteries helped in difficult periods for our country economically either taking care hunted and wounded people either by protecting our cultural heritage.

Those places aren’t only religious destinations but also are attracted from visitors for its architecture, the paintings and the heirlooms.

The most beautiful and inextricably linked with nature and history in the area of Arcadia are the two hidden monasteries in Lousios gorge.

The “Filosofou” monastery has an old building and a new one.  According to the legend, the old monastery was built by Ioannis Lambardopoulos who was advisor of the emperor Nikiforos Fokas. The ancient “Filosofoy” monastery is dedicated to Mother of God and it was founded at the 10th century. The new one was founded in the middle of the 17th century. During the Ottoman occupation, the monks helped little kids by educating them and that’s why it’s also called “secret school”.

The other known monastery is “Timiou Prodromou” which was built on a huge vertical rock. During the Greek Revolution, it worked as a medical station for the wounded Greeks. The above is proven by the bullets of Turkish guns in the entrance door.

In the Kynoyria province is located the monastery of Malevi. The first monastery was founded in 717 A. C. It was named “Malevos” from the highest peak of mountain Parnon. Because of the snowy winters, the monks decided to abandon this monastery and built a new one lower in the mountain. On May 8, 1768 the Turks burnt the monastery as a result of the help to Greeks fighters. The monastery became a nunnery in 1949 and nowadays nine nuns operate it. There is a miraculous icon out of the seventy paintings by Evangelist Lucas that attracts many believers, as the miracles of the icon are countless.

The imposing monastery of “Panagias Elonas” stands in a cliff 17 kilometers away from Leonidio in the mountain Parnon. According to the tradition, two shepherds saw a light. After a while, they realize that it was a light of an oil lamp in front of an icon. It was impossible to approach in spite of the effort they made. After that, all the inhabitants prayed and the image lowered by itself. When they climbed, they found out it was an icon of Virgin and Christ. Kallinikos and Dositheos, two monks built a wooden chapter and the access was made by a rope ladder. Based on the same tradition, two Turkish lost their vision trying to steal the chapter and being brutal with the monks and they regain it when they promised to return the swags. During the Orlov, the Turks burnt the monastery but the 18th century the monks and the inhabitants rebuilt it. As a result of the acme of the monastery, the Ecumenical Patriarchate proclaimed it as Stavropegic Ecumenical monastery.

The Holy Monastery Varses is located 11km. out of Tripoli in the mountain Ktenias. This male monastery is dedicated to St. Nicolas and was established in 11th century.  The running water from the taps in the yard comes from a hidden spring inside the Sanctuary. The monastery has a rich material in archives, books and relics. Plus, in the Sanctum lies the relic of the Martyr Demetrios and a part of the Martyr Paul’s relics, who are the city’s patron Saints.The Great Wednesday, takes place the ceremony of the Washing of the Feet by the Metropolitan.

The monastery of “Epano Hrepas” stands on the south side of mountain Mainalon at an altitude of 1278 meters and is visible from Tripoli. It’s dedicated to Virgin Mary and is called after the nearest peak of the mountain. The Patriarch Constantinople, Jeremiah II bestowed the stavropegial privilege to the monastery in February 1581. Here kept the Grail that communion Kolokotronis, the Elder of Moreas and the Gospel that embraced before the siege of Tripolitsa’s. Until 1934 the monastery was for men but in 1935 it became nunnery by decree of Archbishop of Mantineia, Germanos. The Holy Friday, takes place the Descent from the Cross.

Religious tourism is one of the oldest forms of tourism.Religion and faith are everywhere in the area of Arcadia and in general in Greece and that makes it the perfect destination for the religious visitors!