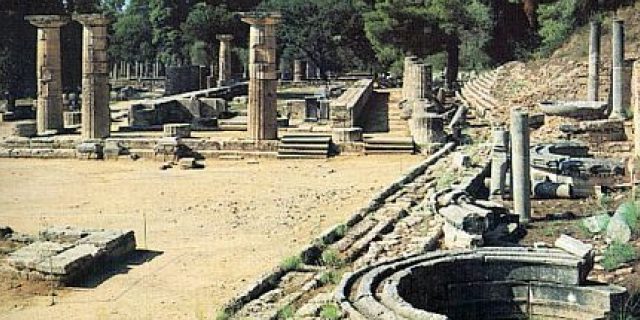 The first recorded Olympic Games took place in Olympia in 776 B.C although it’s certain that they existed earlier.  The Games at this time were local and the Greeks were competing in foot race only. During the Olympics, the athletes were competing in pentathlon, wrestling, horse races and pankration. The sports lasted 5 days and were divided in two categories, light and heavy.

The religious festival was held in honor of father of the Gods and for this reason Phideus made a golden statue of Zeus that was placed inside his temple. It was so colossal that the people considered it to be one of the Seven Wonders of the Ancient World.

At a time that the wars prevailed, Gods sent an oracle to people to engage athletics and gentle aversion. The Olympics would be held every four years and if it was a civil between the city – states, it would stop for the cease- fire period.

The winner was honored with the prize of an olive wreath that symbolized eternal glory and all the ideals for which the athletes would compete.

The observation of the Games was allowed to everyone except to the married women. The only married woman that was allowed to observe the games and had a special position just opposite the thrones of the judges, was the priestess of Dimitra. Although women couldn’t take part in the competitions, they could be honored with prizes if they were owners of winning horses.

Making an account of the points that impress me about the Ancient Olympic Games, I quote to you the following five points: