THE DAUGHTERS OF ATHENS 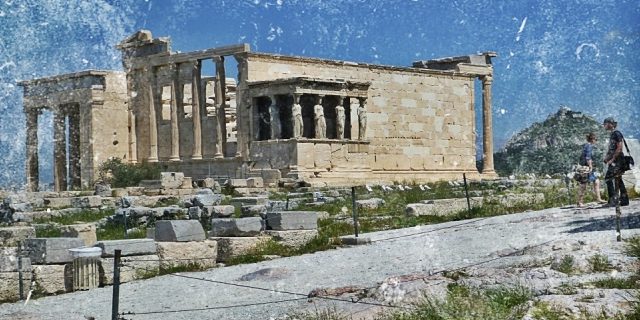 Located on the southern side of Erechtheion, gaze the Parthenon and in the background the city of Athens.

THE HISTORY OF THEIR CONSTRUCTION

After the end of Persian wars (451 B.C) and the win of Greeks, the Athenians who had played a decisive and leading role, decided through their leader Pericles a magnificent plan for the reconstruction of the Acropolis rock. These sanctuaries had already been destroyed during the war, since they were mostly made of wood. The plans and the supervision were undertaken by the well- known sculptor Phidias.

Erechtheion was built on the foundations of an old temple that existed there in honor of Goddess Athena. It was the last building on the Acropolis rock and it was probably designed by the architect Mnesicles. Its construction started in 421 B.C and lasted till 407 B.C. The strange thing with this particular building is its different architectural approach since it consists of levels of different height because it is built on a slope. The temple was dedicated to Athena and Poseidon for remembrance of the confrontation of who will give his name to the city. For this reason the eastern part was devoted to Athena and the western to Poseidon.

On the south side instead of the columns, we observe 6 female statues in Π shape. The Caryatids while they look like each other, they are unique. Their hands are free and all the weight falls to the head although the canister helps to see the support of the temple in a natural way. In their hands, they wore bracelets with snakes and carried utensils with libations.  Their hair was differently combed in each one and caught back wearing a long tunic. Pentelic marble has been used and it is possible that each one was painted in different colors.

THEORIES OF THE ORIGIN OF THEIR NAME

In our time 3 are the most prevalent theories. The name Caryatids was taken much later and according to the Roman architect Vitrouvios, they were virgin dancers from Caryes in Laconia who were dancing in honor to Artemis. Another theory is that before the battle of Thermopyles a city in Laconia, Caryes despised the alliance and supported the Persians. After their victory the Greeks completely destroyed the city, killed all the men and sold the women as slaves. In order not to forgive their betrayal, they started constructing statues of women and placed them in their monuments instead of columns.

None of the above theories can be justified because originally they were created in Athens and also because the Carya girls used to dance and pray with a short tunic. Nowadays, it is considered by the scientific community that they are Athenians daughters dressed in the Doric veil and with a simple tunic which was common in the area of Attica. More likely their first name was “Kores” which means daughters.

Whatever is the truth about the origin of their name is lost in the depths of centuries. The fact is that the goal to endure and not to cause any damage due to them in the monument was achieved.