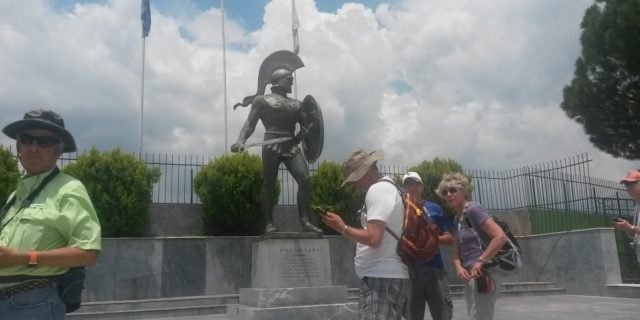 Each year the last weekend of September is organized the Spartathlon Ultra Race.

This race takes place in honor of the runner, Pheidippides. From the history, we know he was an Athenian runner. When the Persians approached the port to Marathon in 490 B.C, the Athenians decided to send a messenger to Sparta to ask for help. According to Herodotus, he spread the distance between the two towns in less than two days. When he arrived there, he found out that the Spartans were willing to help but they informed him that for religious reasons they should leave 6 days later. On his return to Athens, he also took part in the Battle of Marathon.

Another proven fact that Herodotus gives us is that the Spartans spread the distance within 3 days after going about 14 hours per day. They arrived the day after the end of the Battle.

But which was the day?

In Ancient Greece the months began two weeks before the full moon (Noumenia) and lasted 29 or 30 days alternately. The New Year was linked to the sun and it wasn’t same for every city- state. For Athens, it was after the summer solstice, while for Sparta after the autumn equinox. On the basis of the above, the archaeologists succeeded to determine that the Carnian month of Spartans corresponds to the Athenian’s Hekatombaion and therefore since the full moon was then on August 10, the Battle should be given on September 13.

In 1982 a British after reading the feat of Pheidippides wondered if it was true what it was written by Herodotus. So, the autumn of the same year, he and 4 other runners decided to visit Greece and follow the same route. After planning, the start was given on October 8 from Acropolis while the arrival in front of the statue of Leonidas was completed 36 hours later.

So, Herodotus was right and from that moment each year hundreds of runners participate to this event.