THE TWO IDENTICAL STATUES IN DELPHI 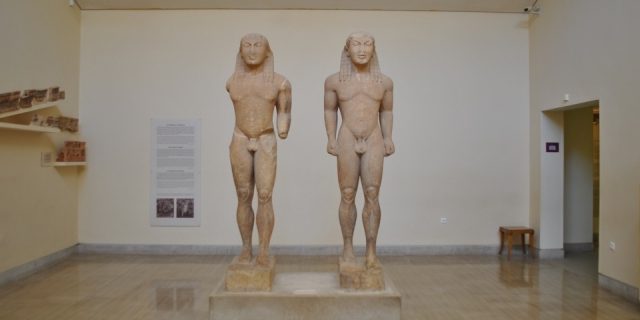 At the archaeological museum located in Delphi after excavations that took place at the end of the 19th century by the French school of Athens, 2 similar statues were discovered. At the base of one of the two statues, there was an inscription revealing the name of the sculptor, Polimides and their birthplace which was the city of Argos.

According to the archaeologist, there are two theories about who can be portrayed. At the beginning of the discovery, the archaeologists believed that the statues portray the brothers, Kleobis and Biton.

The two brothers were referring by Herodotus when he wrote the story about the visit of the Athenian legislator, Solon to the king of Lydia, Kroiso.  The last one asked Solon who considered the happiest man in the world, believing that Solon will chose him because he was the richest man. Solon believed that only at the end of his life someone could know if he was really happy and for this he chose as examples Tellus of Athens and the two brothers from Argos. The two brothers were known because they had won many awards in athletic competitions. Their mother was the priestess of Hera and she was responsible for performing rituals in honor of the goddess. One day, the oxen that would take the carriage were found dead. To prevent their mother to being punished, Kleobis and Viton decided them to transfer the carriage. When they arrived at the temple the attendants praised their act while beatifying their mother for the children she had. After making the sacrifices and being exhausted, the brothers lie down and fell asleep. When their mother saw them, she asked from the goddess to give them the best gift. The goddess gave them painless death as the best gift a God could give to a human is the death at the happiest moment.

But a different interpretation of the inscription allows us to assume that the identity of the statues is about the “Dioskouroi”. In Greek mythology, Castor and Polydeuces were twin brothers known as Dioskouroi because Zeus (Dias) was their father. If the traces of the letters read differently show us the word “Anakes”. With this word the two brothers were known in the area of Argos. Another fact that reinforces this theory is the shoes that the statues wear. At this period in Ancient Greece, the shoes were common only to the travellers and our twins were those. The two brothers were equally important to the Roman mythology since the Romans considered that they were the protectors of their army.

Whatever their identity may be, their authenticity and their significance can’t be denied. The statues are creations of a different faculty, that of Argos. The trunk of the body is shorter while the chest is placed higher. The head is cubed- shape and so the face is wider and the forehead closer to the other facial features. Finally, the thin lines created in the chest give the impression of wearing armor. With this way, we can identify the differences with the corresponding in Athens and the Greek islands.