THE BATTLE OF NAVARINO 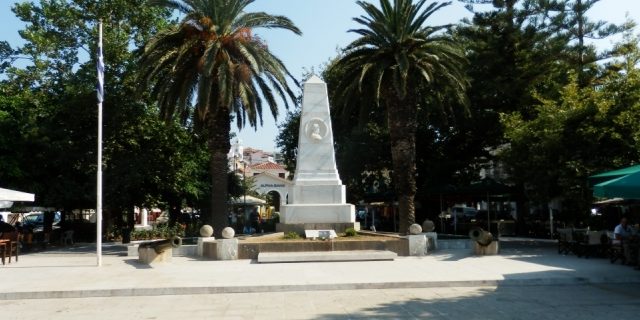 The naval battle took place on October 20, 1827 and was crucial for the independence of Greece.

Developments have been routed earlier with the reflection of England and France due to Russia’s expansive dispositions in the Black Sea that led to the financial support of the Greeks. At the same time, the pressures that the governments of the three countries received from their peoples to help Greece were more intense because of the ferocity and brutality used by Ibrahim Pasha.

The situation in Greece was critical and the Revolution was hanging from a thread. After the death of Karaiskakis, the Turks regained the Acropolis while the chieftains in most of the areas of Central Greece were reconciled with Kutahi Pasha. How divided were the Greeks is also apparent with the unreasonable imprisonment of Kolokotronis and others chieftains on Febryary 6, 1825 and his release on May 19, 1825 after the defeat in Maniaki village and the intervention of Papaflessa that general Kolokotronis was the only who could defeat Ibrahim Pasha.

On June 24, 1827 a treaty was signed between Russia, England and France for the autonomy of Greece. The borders were established between Pagasetic and Ambracian Gulf and its validity would only take place if it were accepted by both warriors. Greece hastened to accept the deal immediately but it didn’t happen the same with Ibrahim Pasha who asked for some time (20 days) so he could pass the message to Egypt and Constantinople. At the same time he promised that his navy won’t sail from the port of Pylos as long as he waited the Sultan’s answer to their request.

On September 7, the allied fleet that aimed to enforce the ceasefire arrived in Peloponnese. Before the final battle in Pylos, 12 Britain ships, 7 French and 8 Russian ships tried several times to prevent the Turkish ships for sailing to Hydra and Patra. But after the arson and killings that Ibhahim Pasha started on shore, the three chief admirals decided not to stand the violence of the Turks.

On October 20, the admirals decided after a letter they received from Kolokotronis for genocide in the area of Messinia to also send with colonel Cradoc a letter to Ibrahim Pasha to stop any hostile action. The last avoided meeting up with the colonel and for that two days after the admirals decided to enter inside the Navarine Gulf to oversee the Turkish- Egyptian fleet.

The admiral Codrington tried one last time to convince Ibrahim Pasha to capitulate so he sent a Britain boat to approach an Egyptian fire ship and tell them that their purpose wasn’t to fight with them but to force them to return to the port. The Egyptian with no reason killed the envoys and Peter Mikelis became the only Greek who died in this battle. Till the end of this battle the Allied fleet has triumphed. Of the 89 ships of the Turkish- Egyptian navy the 60 had been destroyed or had been sunk.

The next day the Allies demanded from Ibrahim who had escaped to the Messinians mountains to raise a white flag from every fort otherwise his refusal would mean the beginning of a war. The battle of Navarino showed that even the fleet of allies had a numerical disadvantage, the fleet excelled in education, experience and discipline.